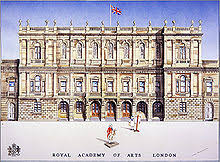 Britain’s oldest fine arts institution will be celebrating its 250th Anniversary in 2018. The Royal Academy has an illustrious history that spans from the mid 18th century through to the 21st century.  We contemplate its past and review its various homes before settling on its current Mayfair location in Burlington House. This fully illustrated talk explores a selection of its ground–breaking temporary loan exhibitions and considers its role and impact on the art scene, both on British soil and overseas.  The talk wouldn’t be complete without a behind the scene look at the Summer Exhibition – held without interruption since 1769 – which displays works in a variety of media and genres by emerging and established contemporary artists. In addition, anecdotal stories will also be revealed by the lecturer based on her twelve year career with the institution. We also consider the influence of certain world-renowned Royal Academicians, exemplary artists in their chosen field, and the pivotal role that is played by the RA Schools.  The impressive roll call of RAs over the past 250 years includes household names such as Reynolds, Constable, Turner, Munnings and, more recently, Hockney, Paolozzi, Foster, Craig-Martin and Gormley. By charting its history through intriguing and important archival photographs and considering its place in Britain’s rich artistic heritage, we can mark this significant anniversary and consider its future with much excitement and anticipation.