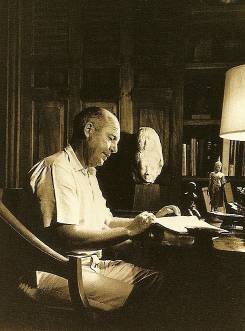 Jim Thompson arrived in Bangkok as a US army officer in 1945, fell in love with it and stayed. Captivated by the beauty of Thai silk, an ancient craft in decline, he resuscitated it and made it famous, creating costumes for films and embellishing his house, which today is a museum. An aesthete and art  collector, he created an exquisite home from six handcarved teakwood houses brought from the countryside and filled it with Asian art. Here he became a legendary host. This lecture tells the story of his achievements, showing the intricate process of silk production and its illustrious heritage, including royal robes and temple murals. It touches on films featuring his silks, reveals his house and its art and reflects on a life that ended with his mysterious disappearance.

Art historian, author, lecturer, photographer and journalist. Worked in Cambodia in the 1990s and has been a scholar of Southeast Asian art ever since. Her books include one on the Buddhist temples of Laos, Ancient Luang Prabang and Laos, also in French, and Cambodian Dance Celebration of the Gods, with a foreword by the daughter of King Sihanouk. Lectures for the Art Fund, the School of Oriental and African Studies (University of London) on their post graduate Asian Art Course and for Madingley Hall (University of Cambridge); also for organisations such as the British Museum, the Royal Society for Asian Affairs, Asia House, the National Trust, the Royal Geographical Society and has lectured worldwide for universities, museums, colleges, art institutions, literary societies and travel organisations. She writes for many art, literary and travel publications and has appeared on television and radio. She has led cultural tours to Southeast Asia and France for the Royal Academy, the Art Fund, Asia House and many more and lectures on cruise ships. A member of the Association of Southeast Asian Studies in the UK, Asia House and the Royal Geographical Society.