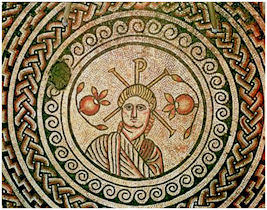 A meeting by invitation only was held on 2 Aug 19 in the Pitt Rivers Tithe Barn at Hinton St Mary (HSM) and organised by The Rev David Dunning and Shane Johnstone. Pauline Batstone, Chair of the new unitary authority for Dorset, chaired the meeting. About 30 people attended, mostly from Hinton St Mary but also included two Sturminster Newton (SN) town councillors and SN Museum volunteers.

Jill Cooke, a curator of the British Museum (BM) gave a presentation on the Mosaic and its proposed relocation from London to Dorset. She explained its national importance in both archaeological and religious contexts. She stated that it had been decided by the Trustees of the BM that the Dorset County Museum (DCM) was to be the location of the Mosaic subject to a confirmatory feasibility study and that SN was unsuitable due to its poor infrastructure and lack of a professional curator. She said there were also significant risks in locating it to SN such as the financial implications after opening, sustaining a continuing high footfall of visitors and possibly not meeting National Lottery criteria.

She also stated that if there was any dissent from SN about the BM’s decision it might result in the Trustees of the BM not relocating the Mosaic to Dorset.

Included in the relocation of the Mosaic to Dorset was the idea of having a self funded visitor attraction in SN which could include artefacts from the DCM and also a funded research project in HSM to determine the extent of Roman occupation in the village. Jill Cooke asked for names of those who could assist in drawing up the concept for the visitor attraction. No location or size of the attraction in SN was suggested.

When questioned about the central roundel* of the Mosaic, which is periodically sent out on tour to other museums, Jill Cooke admitted ownership would be retained by the BM for this purpose and a replica would be exchanged into the Mosaic after the original had been in situ at the DCM for approximately two years.

There was a show of hands towards the end of the meeting which showed support by the invitation only audience for the Mosaic to be located in Dorchester. However, no other site such as SN was offered as an alternative and few SN inhabitants were at the meeting.

On Tue 8 Oct 19 at the committee meeting of the  Arts Society Blackmore Vale it was decided not be involved with the move of the Mosaic to the DCM. Support, if the SN museum agreed, would be given to this museum to develop a Roman Room and  the inclusion of a replica of the roundel.

*It is considered that the roundel is of international importance as it shows the first depiction of Christ. See featured image. The Sturminster Newton Museum and Mill Society has now changed its name to Sturminster Newton Heritage Society. In November 19 The Society wrote to the BM asking if it could have a replica roundel and has received an enthusiastic response.